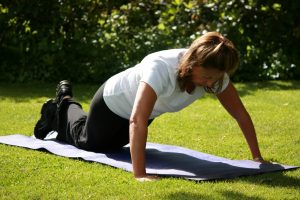 (Original article edited and added to from Mens Health)

You Only Need 5 Minutes

Park your excuses. According to Environmental Science and Technology journal, just five minutes walking in green space is enough to reduce stress and increase your motivation to stay active. In their research, those who exercised within view of a river or lake experienced the biggest mental boost. Best reroute that commute.

Long runs, a PT providing varied outdoor exercises and a cool breeze to speed recovery.  Why did we use gyms in the first place?!

A Park Run Burns More Calories Than a Treadmill

Wind resistance lifts your calorie burn by up to 10%, according to Harvard Medical studies. However, it’s your joints that really stand to benefit here, as the firm, flat surface of a treadmill places more stress on your knees and ligaments. Time to rage against the machines.

Training Outdoors Boosts Your Self-esteem. But Which Type of Exercise is Better?

If you’re chasing the feelgood factor rather than a PB, a stroll should be your activity of choice. Big ideas to pitch at work? Turn your next brainstorming session into a Silicon Valley-esque power-walking meeting. It’ll give your confidence an upgrade.

Men who train in the open air enjoy it more, according to research by Peninsula College of Medicine and Dentistry, while Canada’s University of Sherbrooke found higher attendance rates for outdoor sessions compared to gym classes. More space and less queuing were cited as reasons. A respite from gurning bros and chart remixes probably helps too.

It Will Keep Your Vitamin D Topped-up

Five to 30 minutes twice a week will keep your D levels at optimum, according to the National Institutes of Health. That’s a weekday jog and Sunday morning calisthenics in the park. Schedule sessions for 11am-3pm when the sun’s rays are at their strongest. Don’t overdo it though; no summer six-pack will make up for a lobster’s complexion.

Ain’t nothing weedy bout weeding! A Konkuk University study found that digging and mulching counts as a proper workout. Weeding has been given an MET score of 5 (that’s it’s ‘metabolic equivalent’ value; anything over 3 is considered high-intensity). Digging scored highest with a value of 6.3 – the same as weightlifting.

Your gym’s aircon could be freezing your fitness gains. In a University of Oregon study, cyclists saw a 7% improvement in performance after 10 days of ‘heat exposure’ training.

Exercising in warm weather improves your ability to regulate body temperature and helps the heart pump more blood to your muscles. Returning to the gym 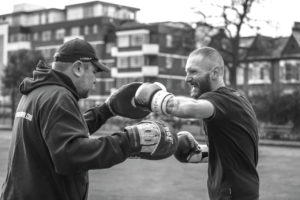 Hi guys, here at boxingtrainer.london I decided to write a blog helping you to get your daily exercise routines going.

First thing to say is that following the PM’s guidelines means if you don’t have the virus or haven’t been told to stay home you can all exercise outside in the fresh air. This can be on your own or with a trainer at a safe distance.

I’m going to give you some outdoor workouts you can try and some indoor workouts for if you are in actual quarantine and cant leave the house.

Make sure you gently warm up and stretch before and after the exercise.

Then the following x 2/3 times.

Then circuits: each exercise done for 1 minute and do the circuit 3 times (rest if needed in between) 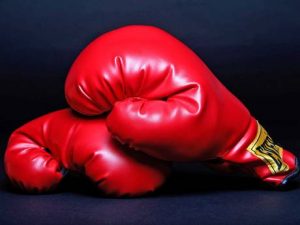 Jogging or marching on spot to warm up 2 minutes.

Repeat x 1, 2 or 3 depending on fitness levels.

(if you have a small dumbbell then great, if not then do more reps!)

Then cool down and stretch.

For more advice contact me or to book in a PT session then let me know via contacts page.

Up to 4 people can share PT for as little as £15 per person. Which for London is very affordable personal training.

A personal trainer will increase your results by up to 60%, try it now with a friend or on your own. Check out the testimonials from happy clients: Click here

Your comprehensive training program and meal planner will be written bespoke and tailored to your individual circumstances using the knowledge and experience I’ve gained in my 15 years working in the fitness industry at the highest level.

Whatever your goals, whether its losing weight, toning up, muscle gain or stress relief then I can and will I help you achieve them.

Why you should box! 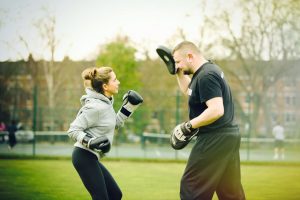 BOXING IS A TOTAL-BODY WORKOUT

A two-for-one cardio and strength workout, boxing targets the entire body, says Jessica Matthews, an exercise physiologist for the American Council on Exercise. “In addition to boosting strength and cardiorespiratory fitness, boxing improves a number of skill-related parameters of fitness, including balance, coordination, reactivity, and agility,” she says.
And with a potential burn rate of 13 calories a minute, boxing goes head-to-head with other types of cardio like running and cycling. Plan to punch away anywhere from 200 to 400 calories* per half hour. Thirty minutes of boxing in a ring torches 400 calories; 30 minutes of punching a bag burns 200 calories; and 30 minutes sparring with a partner blasts 300 calories, Matthews says.
*All estimates based on a 140-pound individual

Perhaps the ultimate high-intensity interval training workout, most boxing rounds alternate between periods of maximum effort and active recovery. “It is both an aerobic and an anaerobic workout,” says Antonio Valverde, a boxing instructor and owner of Elite City Fitness in New York City. That means as the workout intensity increases, your body requires more energy than aerobic metabolism can provide, and suddenly you’re also in anaerobic training territory—the type of exercise that builds strength, speed, and power, and boosts your metabolism. So, compared to running at a steady clip, boxing burns more calories in less time.

Want a serious six-pack? Skip the sit-ups and get in the ring instead. “Boxing is extremely taxing on the core,” Valverde says. “Your hips need to rotate in order to get full extension and deliver a more powerful blow.” And since you’re burning more calories than you would lying on the floor for isolated abs work, you’ll be ready to show off that flat belly sooner.

You had a long day at the office, or you fought with your boyfriend, or your mom’s driving you crazy—whatever’s got you ready to snap, boxing will help you calm down. “There’s nothing better to release some stress than punching a mitt or a heavy bag,” Valverde says. “The adrenaline that is released during boxing and the hormonal response far exceeds any physical benefits.” Not only is hitting something a healthy and productive way to help you let go of tension, the rush of endorphins released are also likely to make you happier too.

Fine-tuning coordination probably isn’t high on your list of gym goals right now, but it should be. Coordination helps you perform better in any workout and strengthens the brain-body connection, boosting your body awareness so you can tune in to how you’re feeling physically. While most exercise routines don’t do much in this department, hand-eye coordination is key for boxing. Punching a bag or sparring requires focused movements and amazing recall, challenging your muscles and your mind, says former championship boxer Michael Olajide Jr., author of Sleekify and co-owner of Aerospace in New York City

Most cardio focuses on the lower body. With boxing, however, your primary moves come from your upper half, making it a great cross-training option when you want to bust a running or cycling rut, or knock out some cardio that won’t tax your legs too much.

It’s easy for your fitness routine to become, well, routine, but boxing will keep you on your toes. Unlike running on the treadmill, there’s always something new to learn. “Boxing is a never-ending fitness challenge,” says Olajide, who trains Victoria’s Secret models Adriana Lima and Doutzen Kroes. “No boxer who has ever gloved up has mastered all aspects of boxing, so when given a knowledgeable boxing trainer, it will never get boring.” And that means your muscles will never start yawning, so your body will continue improving too.

Forget tire flipping and box jumping—boxing can be a safer (yet just as effective and demanding) alternative to some of the riskier heart-pounding workouts out there. “Your body moves exactly the way it was intended to move, just at elevated speeds,” Olajide says. “Plus you can train with the same intensity and purpose of a competitive boxer in your home or gym. That’s not necessarily so for other fitness endeavors.”